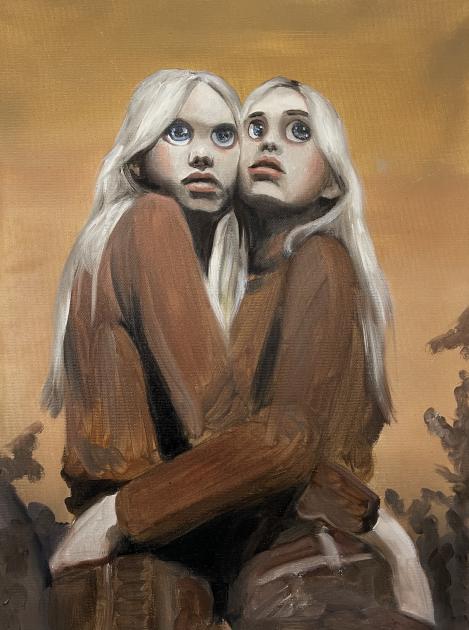 PORTRAIT OF A FUTURE

Charlie Stein’s paintings and drawings depict female robots that resemble humans on the surface, and yet appear unnatural. The artist humanizes machine-like figures by assembling individual components from various Instagram selfies to create new images. The portraits follow the typical style of staged self-portraits found on the Internet. Stein often shows her subjects looking slightly upwards. Their abnormally large eyes are in keeping with the transformations promoted by the facial filters common on social media.

The artist deals with the relevance of robots and the portrayal of femininity in the digital age. The robots that serve as references for the artist are partly real, and partly of imaginary origin. The work Unimate in Paris (2020) refers to an industrial robot that was made operational by the Ford company in 1961. Made in the shape of a single arm, the robot built and welded components for car bodies. Stein added a female body to the arm to the robot. The young woman in a brown coat is holding a cigarette and looking apathetically past the spectators. By using this feminine identity, the artist counteracts the masculine connotations of the machine. For the work Awakening Health (Grace & Grace) (2020), Stein uses the nursing robot Grace, which is used to care for the elderly. Represented in the piece as young, blonde, petite women, Grace and Grace embrace, giving each other support. The deeply human gesture raises the question of the extent to which the concept of nurture – also a stereotype associated with femininity – is at all relevant to robots. Based on the assumption that women appear more trustworthy and subordinate, their form is often favored for machines intended to serve humans. As a result, they reflect the gender stereotype of the young, attractive, and obedient woman. In her works, Charlie Stein reflects on this archetype and pulls it out of its servitude. By making them the focus of her portraits, she grants them autonomy.

The exhibition title PORTRAIT OF A FUTURE is derived from the series Portrait Of A Future Self (2019-2021). The female robots free themselves from the constraints of their intended purposes and turn both gender clichés and the relationships between humans and machines on their heads. In light of the increasing significance of robot technologies in our daily lives, questions emerge about their social functions. Robots are produced by humans and therefore shaped by our norms and values. Charlie Stein’s works open up the opportunity for reflection. In the future, will we continue to reproduce stereotypical role models in the machines we are creating? Or do we have a desire to change and develop a more open, diverse and fair existence to shape our future?

About the artist Charlie Stein and the curator Peggy Schoenegge

The artist Charlie Stein and the curator Peggy Schoenegge met at SALOON Berlin, an international network for women working in the art world. During a studio visit, the curator learned more about the artist’s work. Charlie Stein’s work draws the viewer in with an aesthetic reminiscent of the selfie culture on social media. The conceptual framework of the works opens up upon second glance: mutations and incongruities reference our technology-based daily life and the female role models embedded in it. Stein’s work ties in with the curatorial work of Peggy Schoenegge, who deals with the societal effects of digitalization from a feminist perspective. Schoenegge is also drawn to how artists reflect on the significance of technology in traditional mediums such as painting.

In her work Charlie Stein deals with dominant cultural aesthetics questioning existing modes of perception within the context of a highly digitized, visually overstimulated world. Her material is gathered through extensive research and translated into drawings, installations, sculptures, paintings and text. Her focus lies on social structures, digital media and contemporary forms of communication. She holds a postgraduate degree in fine art from the State Academy of Fine Art where she studied at the classes of Christian Jankowski and Rainer Ganahl in Stuttgart, as well as the class of Gerhard Merz in Munich. She was a recipient of a DAAD scholarship in 2010 to reside in Beijing, China. Recent exhibitions include Manifesta11, Villa Merkel, the Songjiang Art Museum in Shanghai, Museum Villa Rot and the 2017 edition of the Istanbul Biennial.

Peggy Schoenegge is an independent curator, writer and project manager at peer to space as well as chairwoman of the media art association in Berlin. She holds a B.A. and M.A. in Art History by Humboldt-University Berlin and Technical University Berlin and spent a year at Ritsumeikan University in Kyoto (JP). Her work deals with the conditions and challenges of digitalization and its effects on our everyday life, society and culture. Specifically, she addresses gender, performance, and artificial intelligence by curating digital art, internet art and art with new media such as VR or AR in both real and virtual exhibition spaces. She gives lectures and participates in panel discussions internationally at conferences and events such as the VRHAM! Virtual Reality & Arts Festival, WISE Conference or for the Goethe-Institute. Currently she teaches at the University of Applied Sciences Darmstadt in expanded reality.