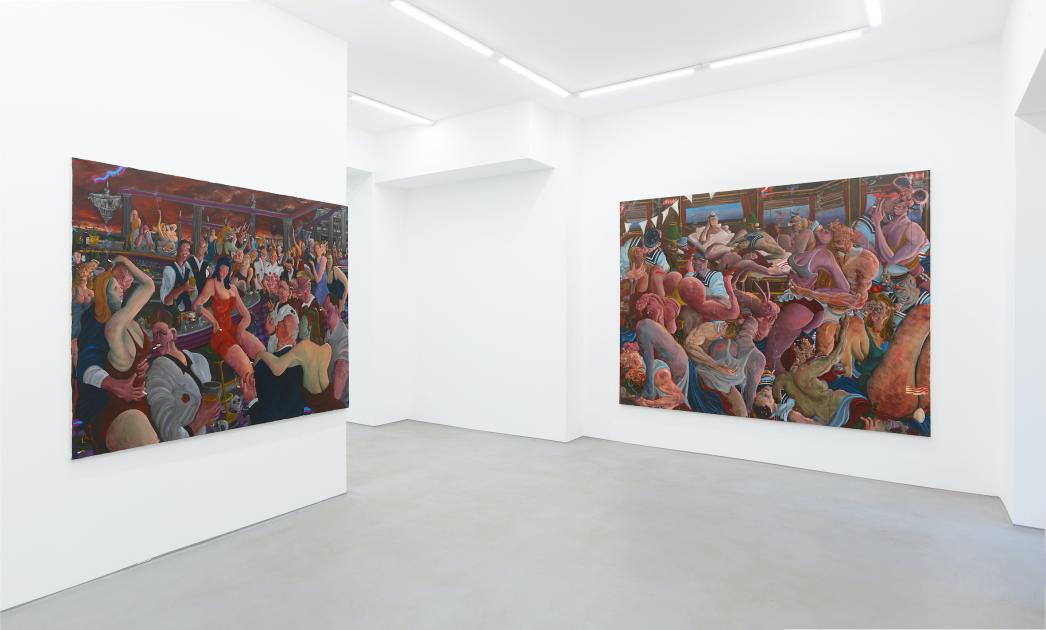 Installation view, Galerie Droste Düsseldorf
Suffering and love are probably closer together than anything else in this world. Willehad Eilers (1981), aka. Wayne Horse, processes this pleasurable - and painful - theme in the paintings of his third solo exhibition at Galerie Droste. In the oil paintings to which Eilers has devoted himself for several years now, tumultuous scenes open up to the viewer, to be located throughout on a ship, which gives the title of this exhibition. The LOVE BOAT of Willehad Eilers appears as a microcosm of our world, which is about to explode. Thus, an atmosphere of ecstasy is created, the dissolution of man into his primal instincts and drives, but also his need for love and affection of others. As in Eiler's previous exhibitions, LOVE BOAT is a further development of his central work subject: the fragility of the moment, which usually reveals itself when man has nothing left to lose. With his unique, sensitive and at the same time humorous view of the complex themes of human existence, this exhibition is again a spectacle, best described by the artist himself: "Look forward to a get-together in the company of intrusive, loud, sometimes funny and disturbing images. Best endured, as well as the situations described to them, with a (thousand) glasses of wine".

Willehad Eilers, born 1981 in Peine (DE) lives and works in Amsterdam (NL). He is a graduate of the Gerrit Rietveld Akadmie and graduated from the Rijksakadmie Amsterdam in 2010.